Happy to Color Outside the Lines!

So I just got back from vacation with my husband. Vegas. First time on vacation that wasn’t work related or a familiy trip…ever. Kind of amazing.

I’ve been in a funk since we got back, so in an effort to recover I decided there is only one way to stop the vacay mourning process: Plan the next one.

This time with the kiddos.

This is where we are going. I am SO excited. The kids are too. The hubs even pointed out that there are “unschool dad” groups he can attend. I love that he noticed and cares.

Everything about this trip excites me. The location, the route we’re taking, the city we’re staying in, the philosophy behind the conference…it’s all just so wonderful.

Can’t wait to do a bit of “Roamschooling” with the fam…only 268 more days!

Peter Piper’s Got Nothin’ on Me!

I think. I don’t know how many peppers are in a “peck” but I have sure handled an awful lot of them lately.

Roughly 1.5 pounds went into freezer salsa when I was given 30 pounds of tomatoes last week. 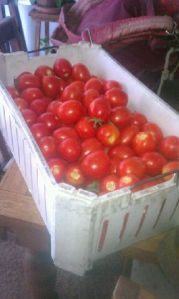 The other 8.5 or so went into 8 quarts of pickled jalapenos. 🙂

The process is easy, even for a canning newbie. I am going to give you the instructions for pickling about 3 lbs of chilies in the event that you aren’t going pepper-crazy like I did. 🙂

1. Wash and sterilize your jars in boiling water.

2. Wash all of your peppers, trim off any “bad” parts, but leave the stems. Puncture each chili so that they don’t all float in the jar. Note: Use gloves. Trust me.

3. For 3 lbs of peppers, You will need to heat a combo of 6 cups of white vinegar, 2 cups of water and 3 whole cloves of garlic. Bring mixture to a boil, reduce, simmer for 5 minutes. Remove garlic.

4. Pack your peppers into the hot jars, leaving 1/4 inch headspace. 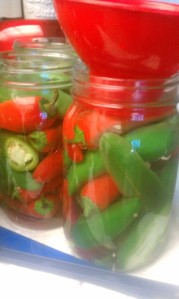 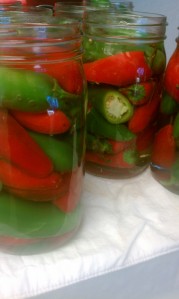 While it seems like an awful lot of peppers, I have learned from experience that between the amount of chilies we eat and the number of jars I give away, I need roughly 15 per year. Needless to say, I will pickling again next week. Lucky for me, I have access to amazing peppers from an amazing farm. 😀 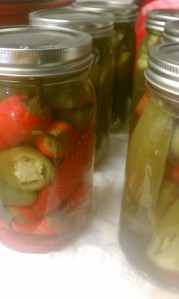 Maybe I will get a peck next time. 😉

Too Hot to Cook Challenge: Day 2

Tomorrow is CSA day, which means today I’m lucky if I have anything left from it. 😉

What I do have left is some jalapenos. And a few peaches. Oh, and like 2 cloves of garlic.

Spiced hummus, w/peaches and cream smoothies to tame the spice.

Make your hummus. If you have never made it before, you will be amazed by how easy it is. 🙂 Here is your basic hummus recipe:

One 15-ounce can garbanzo beans

Half of a large garlic clove, minced

2 tablespoons olive oil, plus more for serving (I use Bari)

1/2 to 1 teaspoon kosher salt, depending on taste

2 to 3 tablespoons waterDash of ground paprika for serving

Combine all ingredients, minus the paprika, in a blender or food processor. Process until creamy and smooth. Serve with a drizzle of olive oil and a dash of paprika.

For my *spiced* hummus, add to the basic recipe, before :

Serve with pita, pita chips and/or veggies. And breathmints. 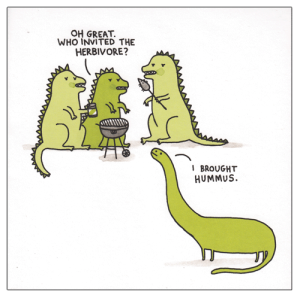 Now, for the smoothies.

In a blender (that has been washed really well and doesn’t smell like hummus), toss in:

4 peaches that have been pitted, halved and frozen. Peel if desired, before freezing, preferrably.

Puree until creamy. Thin as needed with a milk of your choosing. I thin mine with vanilla flavored kefir. 🙂

Serves two large smoothies or four half sized ones. 🙂

These would be SO good frozen in popsicle molds for the kids this summer!

Quick, easy, fresh and packed with protein…all without the heat of the oven. Sounds great to me!

Too Hot to Cook Challenge: Day 1 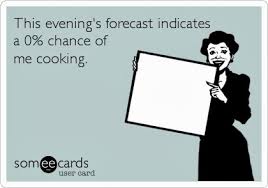 The challenge? It’s too hot to cook. Especially in a small space. 108* degrees has a funny way of making you reach for Chinese takeout.

The plan? To post a new recipe each day this week that doesn’t require the oven…and perhaps, very little or no stovetop use.

My salad was made yesterday out of whatever we had between my CSA box and leftovers in my fridge:

Pulse to combine, then turn blender on, and slowly drizzle in 3/4 cup good quality olive oil.

Toss w/your fave salad combo, and enjoy. Oh, and tell your oven to enjoy  the vacation. 😉

What’s not to love about a recipe title like that?!

Not only was it delicious, but it came together fast, was full of healthy, organic ingredients and was a perfect fit for what is sure to be one of the few crisp evenings we have left this season. Another bonus? I had four of the required ingredients at my fingertips from my CSA box. 😀

Earlier this week I was given a 50 pound box of potatoes. When I saw the recipe that inspired this variation, the potatoes are what sold me. I made a double batch so that I could freeze some for another day. By another day, I mean a day when it’s so stinking terribly hot that I don’t feel like cooking. Those days aren’t far off.

SUPER easy. For ONE batch, use the following recipe. As I said, I doubled it.

1 pound bulk spicy italian sausage (I found it at Sprouts.)

3 cups organic half & half

pinch of salt to taste

basil for garnishing (and amazing flavor)

Brown the sausage, drain any fat/grease.

Add potatoes, tossing all ingredients until coated and incorporated.

Add chicken stock, bring to a low boil, then drop to a simmer for 20-30 minutes until potatoes are tender.

Add half & half, kale, oregano.

Serve with a garnish of basil on top. 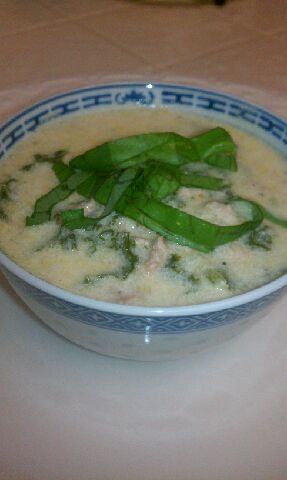 Considering the free ‘tatoes, the awesome CSA bargains and the Sprouts meat sale, and the fact that our local Grocery Outlet market had organic half & half AND organic, free range chicken stock SUPER cheap, I was able to do a DOUBLE batch of this soup for less than $6.00. That’s all kinds of amazing.

Give it a try!

This post could also be called “How I fed my family of five a hearty meal with amazing ingredients for $10.00 and still had leftovers”, but it’s not.

My CSA recently announced that dried beans are now an optional box add-on. This is so exciting to me because I love me some beans! I had never, ever cooked white beans before (I know, it’s terrible) so I opted for the “organic white garden beans” in last week’s box. It was time to experiment.

I did some research, sorted through some recipes, talked to my Chef friend and combined ideas to come up with what I think is one of the tastier CSA creations I have cooked up. 🙂 I also love that the beans, scallions (green onions), thyme and rosemary are all local items from my CSA. I meant to throw in some kale from my box and totally forgot. Furthermore, had I planned ahead, I could have ordered some stewed heirloom tomatoes in my box in place of the grape tomatoes. Next time.  This time around, here’s how it came together:

Start with your beans. My bag had 2 pounds of beans, and I used roughly half of it. I forgot to soak them last night so I soaked them this morning for about 4 or 5 hours.

A  couple hours before I wanted to serve dinner, I set them to simmer  with 1 sliced large scallion (if yours are small, maybe slice two), 2 bay leaves and some pink himalayan sea salt. I added enough water so that there is about an inch of water over the beans and simmered for about an hour. 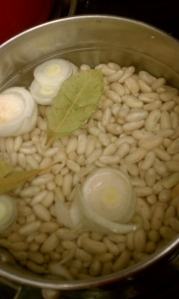 Make sure you use a pot larger than you think you need. I had mine in a saucepan at first, but these beans foamed up something crazy and spilled over. Nice.

Once beans were in a proper sized pot, I pulsed about a cup of grape tomatoes in the food processor until chopped well. You could slice them in half if you like them chunkier or puree if you don’t want chunks at all. It’s up to you.

I then cooked up one chicken and jalapeno sausage from Whole Foods. It’s seriously a half pound sausage so I only needed one. I didn’t cook it all the way through, just toasted it up on all sides so that it would hold together when I sliced it for the stew.

Once beans are fairly tender (this was about an hour and 15 minutes in for me), add the tomatoes, sliced sausage pieces, thyme and rosemary. 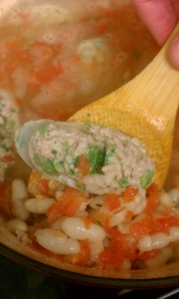 Cover and simmer for another 45 minutes or until desired thickness is reached, stirring occasionally.

While it simmered, I cooked up some nitrate free/uncured bacon (ends and pieces from Trader Joe’s is a great deal!) and (confession time), some corn bread. Yum.

I served it up hot with crispy bacon and buttered corn bread. It doesn’t get much better. 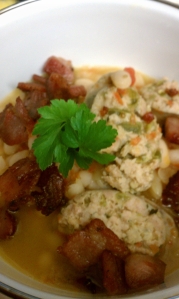 Everytime my kids see that oranges are available for order in our CSA list, they immediately ask for homemade orange and cream smoothies. 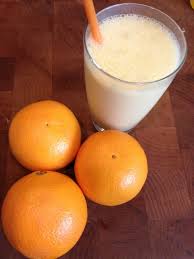 There are kind of like those orange smoothies you can get in the mall, but made with real food ingredients.

They are also very simple to make, which I always appreciate.

Start with 1.5 cups of cream. Yes, cream. It’s full fat, yes. Not scary, especially if you are using raw cream.

Blend  with 4 pasture raised egg yolks (super important that they are NOT store bought!) until the cream begins to thicken, about 30 seconds to a minute.

Next, add a couple handfuls of ice and a dash of vanilla,  1/4 cup real maple syrup and one cup of milk (another raw if possible moment) and blend until creamy, about 1-2 minutes.

Combine this mixture with equal parts of freshly juiced oranges (4-5 oranges) and serve over ice. Serves at least six. 🙂

This week my CSA has 10 pounds of naval oranges that are “a little on the ugly side” for $8.00.  Perfect for juicing…or blending with full fat locally raised raw dairy products until you have created a blissful beverage. 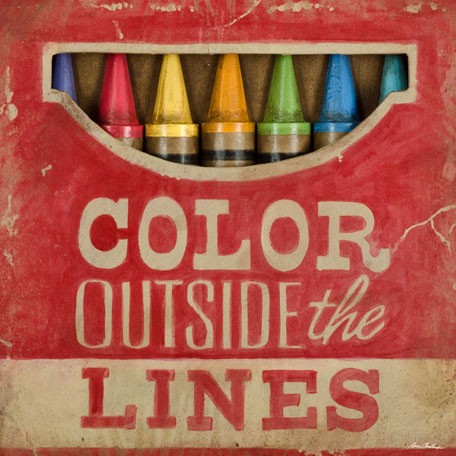